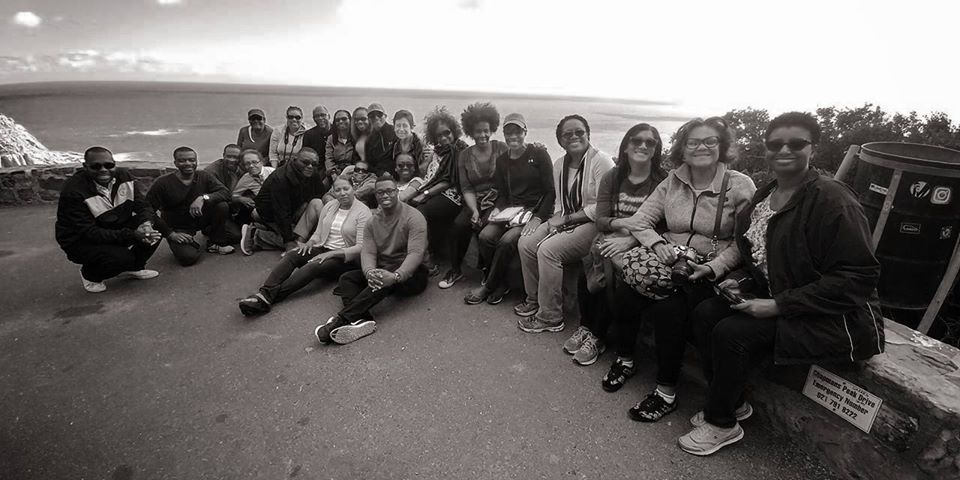 The houses in South Africa have paved roads that lead to beautiful verandas. Standing on the porch, you could overlook the mountains and feel the breeze.

Eleth Teape visited the country, known for being home to Nelson Mandela, during a mission trip with Meals on Wheels and the Lakeview Seventh Day Adventist Church in October.

“I’ve heard people say Cape Town, it’s the most beautiful city in the world. And it is,” Teape said.

But the scenery changes all too quickly.

“You see more of the squatter camps than you see the nice homes or even the government homes. They just deck the landscape,” she said. “These squatter camps, they’ll just put them up wherever they can.”

Faith with works in a South African squatter camp

Teape joined the Powder Springs-based church on a 15-day mission trip to South Africa, where the group fed more than 3,000 people, rebuilt community structures and introduced locals to Christ’s love.

However, she didn’t expect to see such an extreme level of poverty and hunger.

While feeding a group of senior citizens, a man came back for a second plate of food. When he was handed another container, tears began to fall from his eyes.

“In America, yes there are people who are hungry. But almost every church has a food bank. You can get some food from some place. These people don’t have that luxury,” Teape said. “I have never felt hunger that way so that I would cry for a second plate of food.”

Another member of the group, Delford Forbes, noted a similar experience.

From 1948 to 1991, the African country was dominated by the system of segregation or discrimination on grounds of race, known as apartheid.

“To see white people who were once privileged now being at a disadvantage where they’re squatters, it really speaks to the instincts of man,” he said. “Once for me (greed) had a face. Now it has no face.”

Although initially shocked, the church group made effort to talk to those in the squatter camps to learn about what they go through from day to day.

After spending 15 days learning about the country and its people, Forbes said the word faith took on a new meaning for him.

“Your legacy will depend on the person you help and the things you do to help your fellow man,” he said. “…being realistic, we can’t do everything. We’ll never have enough time, but we can influence people who can. It just takes you helping one person.”

A trip to South Africa planned with the help of Christ

For the last 15 years, Sylvia Francis has been a member of Bethel A.M.E. church just outside of Boston, Ma.

With her church, Francis has been on mission trips before. They went to India, twice, to deliver sanitary napkins, clothing and sleeping mats to those in need.

In October, she traveled to South Africa with Teape and other Lakeview church members- relative strangers outside of their love for Christ. Francis said this trip was different for her.

“I’ve been on mission trips before and there’s no comparison. Lakeview is so mission minded in every aspect of the trip,” she said. “I felt the Adventist church got it right when it comes to working with the poor and needy. They’re answering God’s call.”

It may have seemed by chance that Francis made the trip with Lakeview, but she believes it was Christ’s aligning.

She had been inquiring about a mission trip to the African country for some time but never made the trip with the A.M.E. church. She talked to her daughter and wouldn’t you know it? Her daughter worked with Teape in the healthcare field.

Francis said she didn’t even know what Teape looked like until the two met at the airport, where she also met Rodney and Arlene McCoy, Forbes and his wife, Grace, Esther King, Molly and Pastor Sam Chetty, and others.

“Everybody on the trip was so nice,” she said. “They were amazing.”

Lakeview Pastor Sam Chetty is from South Africa, making this mission trip all the more meaningful to him and somewhat of a homecoming.

Chetty said he remembers apartheid and squatter camps full of brown faces, many of which looked like his. When he returned from the mission trip, Chetty said he saw much of what he remembered, but also change.

“The country’s still very very divided when it comes to wealth. The wealth is still in the hands of a few people and there’s about nearly 10 million who go to bed hungry every night,” Chetty said. “So for me, it’s special in that sense to go back and see a new democracy amidst all the other strife and challenges we experienced in South Africa.”

While in South Africa, Chetty and mission trip members worked with the charitable organization Meals on Wheels to feed thousands, visited and communed with those in squatter camps, rebuilt parts of preschool, as well as built a cooler and a kitchen.

Chetty said he has traveled the world doing mission work so for him, it was ministry. For those helped, it was a blessing.

“For me, I think every mission trip changes my image of what the world is about and what Jesus is about and I see myself at the hands and feet of Jesus,” the pastor said. “If He was here, He would probably be doing the same thing. I cannot do it to the same extent as He would do it but in my own way and in my small world…this is how I found satisfaction and accomplishment.”